The Move to Uillinn

West Cork Arts Centre has been a home for artists of all kinds; painters, sculptors, dancers, actors, young and old, for over three decades. After 30 years in its former North Street home, West Cork Arts Centre moved to a new purpose built building in 2015 in the heart of Skibbereen, at the "elbow", or in Irish "uillinn", of the Ilen River and Caol Stream.

18 months ago Uillinn: West Corks Arts Centre opened to the public with the exhibitions Fourth Space and Flying Colours. Flying Colours was an installation of brightly coloured work by primary school children that immediately injected the creativity and energy of the young community into the new centre. Fourth Space drew together works by nine leading Irish artists, filling for the first time the ground floor James O'Driscoll Gallery and first floor Gallery II. The pieces explored themes of space, place, time, legacy and transformation, a complimentary reflection of the progression of the Arts Centre and the move into the
new, bigger building.

The path to building and opening Uillinn was certainly a long and challenging one. It began with the acquisition of the site, formerly home to Wolfe's Bakery in the late 1990's. In 2008 an international competition was launched to find a design for the new centre. The architectural company Donaghy and Dimond won this competition and following some stumbling blocks over the next few years, construction began in 2013 with MMD Construction building an arts centre of outstanding quality.


The new building stands in the footprint of the historical Wolfe's Bakery with the dimensions of the ground floor gallery and studio block echoing that of the old building, and some of the bakery's walls encased within the new structure. As well as that, there has been consideration taken for the swifts that used to nest in the derelict bakery. Nesting boxes have been placed high on the side of the new building should the birds wish to make a new home. In March and April next year, with a CD of provided by BirdWatch Ireland, swift calls will be played to encourage the birds to nest by the Caol Stream once again.


Though it was an expensive move, the Centre is entirely paid for and debt free; there is no rent fee as there had been for the previous 30 years. The increase in space is phenomenal, jumping from the 1000 sq ft premises on North Street to a massive 10,450 sq ft at Uillinn.


In comparison, the new five-storey centre has two large gallery spaces, three artist studios, a multipurpose dance/performance/
lecture/film space with an over-looking mezzanine and workshop space, a changing area, and a bright open-plan office, all filled with natural light. As well as the arts space, there is an open courtyard and Kalbo's Café alongside the main building.


The new dance space is equipped with floor to ceiling mirrors, ballet barres and a sprung floor, a well deserved upgrade from the previous, much loved but well worn, work space-cum-dance studio on North Street. The state of the art studio allowed the centre to be awarded their first dance residency by the Arts Council, Tara Brandel, which was an instant embodiment of the many benefits of a move to a purpose built all-encompassing arts centre

The modern and eye-catching Uillinn, is encased in an exoskeleton of Corten steel, a sustainable and durable material, which eliminates the need for painting and resists the corrosive effects of wind and rain by forming a layer of dark brown oxidisation over the metal. Tests have been conducted to confirm there will not be any detrimental effects to the surrounding environment as rusting occurs. 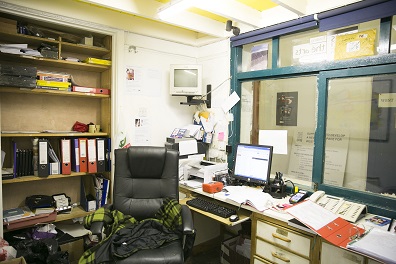 The official opening, by President Michael D. Higgins, took place on the 11th of June 2015. He and his wife watched a dance performance in the new dance studio, bright with natural light pouring through the high windows, and were given a tour of the building by director Ann Davoren. President Higgins spoke highly of the centre, both of the work going on within the centre and also their outreach programmes.

Ann Davoren has been director of the West Cork Arts Centre since 2001. When asked what she considered the main advantage of the new arts centre is she said that it was the opportunity to expand -
"Being able to expand our programme, not only our existing programme in visual arts, but also to explore other art forms in more depth like contemporary dance and performance."

In its first year Uillinn: West Cork Arts Centre saw more than triple their previous average annual number of visitors, 36,500 in total, walk across the Caol bridge, under the cantilever canopy and through the front door. The team running the centre have put on numerous solo and group exhibitions, run classes and workshops, given tours and talks and led an innovative outreach programme with the wider community. The ethos of community engagement and celebration of the arts has remained the same from the outset over three decades ago, but now with physical expansion comes a wider spectrum of opportunities for artists and the public.

The whole effort could not have been achieved without the dedication of the board of the West Cork Arts Centre, its members and artist members who donated generously over the two decades it took to achieve the move. Likewise the former and current Directors of the West Cork Arts Centre have played pivotal roles in the process, along with the Centre's hardworking staff. Financial support came from Cork County Council, the Department of Arts, Heritage and the Gaeltacht and Mr and Mrs Bollinger, a wealthy philanthropist couple who donated generously to help increase accessibility to the arts for the local community and visitors. A significant amount was also raised through auctions and donations from local businesses, whose generosity is commemorated by a beautiful glass Caol sculpture by artist Michael Ray, that stands in the foyer of the art centre.