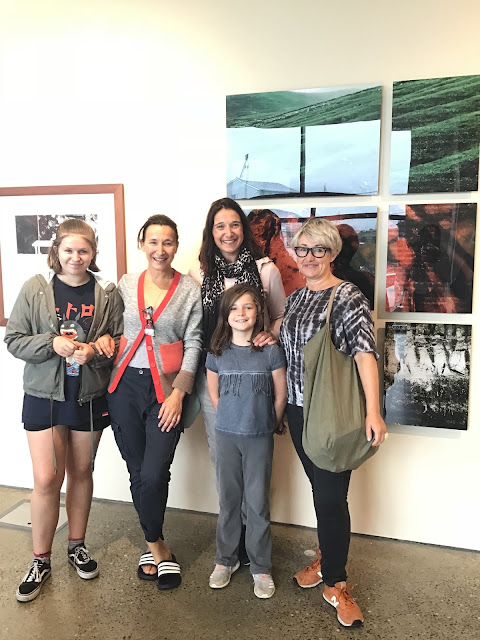 The MacVeigh family were one of our many groups of visitors who joined us on this rainy afternoon at West Cork Arts Centre. Some members of the family had already viewed Coming Home during its time in Dublin Castle as part of their architectural design studies and remarked how interesting it was to see it in a new format. The family felt that the historical short film that accompanies the exhibition is very important to the overall experience, observing that as an art exhibit it manages the monumental historical context of the Famine conscientiously.

Michael Farell’s Black 47 particularly engaged the MacVeighs as they felt it incorporated a lot of the different elements in Coming Home. They found the style and scale of the painting, understandably, impressive but also empathised with the artist’s attempt to recontextualise the Famine as a global human tragedy. The family identified many WW2 reference imagery in the painting. In an experience similar to my own, the MacVeighs expressed disbelief at the story of the Turkish Sultan narrated in the painting.

Black 47 is a painting of an imagined scene; the trial of Charles Treveylan. Treveylan, now infamous in the anthem the Fields of Athenry, was one of the figures in charge of Famine Relief during An Gorta Mor. His inaction at this time is a source of controversy in Anglo-Irish history and this painting addresses the complicated circumstances of the Famine. Farrell was an extremely political figure and had to leave his teaching post in New York due to his outspokenness at the time of the Vietnam war. However, Farrell was Irish born and even though he lived much of his life in England and France his paintings always engaged with Ireland and Irish history. In reality, there was no trial of Charles Treveylan, but there were trials of Nazi leaders in Nuremberg following WW2 and this painting eludes to this, along with other WW2 imagery. In the docks observing the trial is the Turkish Sultan.

I first saw the figure, like the MacVeighs as being rather bizarrely misplaced in this particular courtroom drama until I learnt of the interesting story behind his inclusion in this scene from the exhibition’s curator Dr Niamh O’ Sullivan. The Sultan of Turkey had an Irish doctor who convinced his employer to pledge £10,000 in Famine Relief aid to the Irish people. However, as Queen Victoria had only contributed £2,000, the Sultan was asked to lower his contribution to the sum of £1,000 to avoid embarrassing the Queen.

This absurd tale ignited a strong sense of poignancy amongst the MacVeighs. They left the exhibition with an idea for an interesting public venture; that Famine graveyards and villages should be opened as national parks and heritage sites in homage to the Famine victims. The exhibition arouses strong feelings and reactions among our many visitors and I look forward to sharing more of these experiences in the coming weeks.
Posted by Unknown at 14:49 No comments:

I arrived at the gallery today and was once again overwhelmed by the interest in Coming Home. Visitor numbers reached a record-breaking 800 last Thursday and have been generally a consistent 500 a day! The exhibition engages with a broad spectrum of interests from Irish history to world history, art history to contemporary art, local interest to current social significance to everything in between. Coming Home embraces a variety of perspectives and interpretations creating an inviting atmosphere that visitors can respond  to. The tour team and invigilators are all hearing so many stories and personal accounts form visitors, I hope in the coming weeks to able to share some of these with you..

Photo credit: Zenda Williams
Posted by Unknown at 17:51 No comments:

The programme of events at the Uillinn this summer is extensive and an event I was unlucky to miss was 110 Skibbereen Girls by artist Toma McCullim. This event was the culmination of a year long project as part of the ongoing and comprehensive Arts for Health Partnership Programme managed by West Cork Arts Center since 2005. The artist worked at Skibbereen Hospital Campus, with the staff, service-users, residents and visitors to create this site-specific artwork.

Earl Grey's Famine Orphan Scheme, the inspiration behind the project, has been the topic of conversation among my friends and I since the event's launch. The story of how 110 orphan girls, aged between 14 and 18, left Skibbereen in 1848, in the middle of The Great Famine, for Australia has received press due to Toma’s project. These girls worked as domestic servants before being matched to a suitor when they were of a suitable age. The girls had, on average, 8 children each and it is estimated that there is 10,000 descendants of the Skibbereen girls. The disbelief amongst my friends and I that these girls, who were younger than us, left their traumatic surroundings for this fate caused this story to resonate . However the artist Toma McCullim is keen not to portray these girls as victims but intends instead to commemorate their bravery. The girls left behind a life of incredible hardship in a town ravaged by the Famine and with remarkable resilience, they sought a better life. Bravely, they left Skibbereen and all they had ever known, equipped with a bowl and spoon, with a desire for a fulfilling life.

Toma used the symbol of the spoon to commemorate the girls. 110 spoons were sculpted in beeswax by the many participants of the project before they were cast in bronze. The spoons are now embedded in  the walls of  Skibbereen Workhouse at Skibbereen Hospital campus. Councilor Danny Collins, deputising on behalf of the Cork County Mayor, spoke about the significance of the project in Cork County and how it takes on a heightened meaning in Skibbereen. Cork Kerry Community Healthcare Chief Officer, Mr. Ger Reaney put the work into the context of the residents and spoke about the important Arts for Health Programme.

The artist Toma Mc Cullim also spoke at the event. I was told by anyone who attended that she spoke with 'a lot of heart' as she described her process; how she connected the staff with the heritage of the site and with the creation of the artwork, before thanking all of her collaborators, management and funders. In a particular poignant tribute to the 110 girls, Judith Constable and her daughter Katriona spoke at the artwork's unveiling. These two women are descendants of Jane O' Leary, one of the 110 girls who left Skibbereen in the mid-1800s. Judith provided an emotive account of the life of her great-great grandmother and also described her own personal search for her ancestors in Ireland.

The Australian Deputy Ambassador, Simon Mamouney was the ceremony's special guest. He officially opened the event with the story of the stone that was brought over from Australia to be embedded into the wall of Skibbereen Workhouse alongside the artwork. The newly formed, Skibbereen Hospital Choir was also in attendance and led by Liz Clarke delighted the crowd with a rendition of both 'Far Away in Australia' and 'Dear Old Skibbereen'. The event was a tremendous success, the extent of which can be seen in how 110 Skibbereen girls has filtered into the conversations of people who weren't even in attendance at this special event.

More information about the amazing work of the Arts for Health Programme can be found at artsforhealthwestcork.com