This week I spoke to musicians Liz Clark and Justin Grounds about their efforts to bring music back into peoples lives despite the lockdown. While distinctly different musicians Liz and Justin have both worked for many years on the Arts for Health Partnership Programme as core artist team members and have community collaboration at the heart of their work. Liz a singer-songwriter, originally from Colorado whose work is folk-influenced, has originated projects such as Starling Song Project (http://www.artsandhealth.ie/case-studies/the-starling-song-project/) and is also director of Uillinn based Skibbereen Community Choir.

Justin is a classically trained violinist whose recent projects include Last Dance, (https://justingrounds.com/news/2017/12/19/last-dance-project-with-inma-pavon) with dancer Inma Pavon and Embracing the Universe, a new oratorio performed by a special Community Choir and 7 musicians at Uillinn this time last year, for Skibbereen Arts Festival.

I first spoke to Justin Grounds about what he has been getting up to recently. Justin is currently in the early process of composing new work  'Isolation 20'. While very much a work in progress, the plan so far is to first find a diverse range of 20 musicians from around Cork. Justin will then call them individually to discuss their experience of the lockdown and how they have been coping with it. After this discussion, Justin will ask them to compose a brief bit of music which attempts to capture their individual experience of the lockdown. Justin will then take those individual sounds and compose a melody from all of the collective sources to make a cohesive work.
After composing, the work will be installed in the gallery. The idea is that you can walk into a space and see 20 separate speakers spread out across the room with a portrait of each project participant above them. The listener can then go up to each speaker and hear the individual sound or else stand in the middle of the room to hear the collective sounds harmonizing together as one. Justin intends the installation to be experienced by one visitor or one household at a time, to underline the feeling of isolation. All going well, this will take place at Uillinn in early 2021.

More generally, Justin spoke of the ups and downs he's had when making music during the lockdown. ''The lockdown has of course been challenging in some ways but it has also opened up more opportunities to learn. I've been able to make music with people from all over the world who have been missing creating music together. Unfortunately, the joy of playing live in a room together has diminished with the current restrictions but the collaborative element has been great. I've been able to see people bring their music together in really interesting ways''. 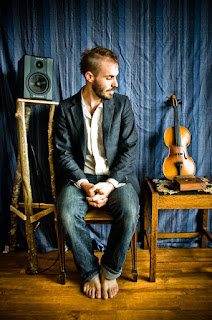 I was also able to speak with Liz Clark about her work with Skibbereen Community Choir. The choir has been around for 3 years now and has members from all age groups and backgrounds. Typically Liz will pick a requested song from one of the members and then organize them to meet once a week so that they can sing the chosen song. In the past, they have sung anything from Crosby, Stills and Nash, to Neil Young, to Joni Mitchell, and even The Waterboys. These meetups usually take place at the West Cork Arts Centre but recent restrictions have made that impossible and the Choir had to be put on hold. Then, not long after Covid-19 hit, Liz would hear the awful news that her mother had contracted the virus. This was naturally a huge concern for Liz but fortunately, her mother went on to make a full recovery. Even during such a scary time, Liz said music helped her through it. She missed making music, and the people she made it with. She decided to reach out to her fellow choir members and like many others, they took to Zoom. Some members of the choir were unused to the technology involved which prevented everyone from joining which saddened Liz as she didn't want anyone to miss out. The members that could join were initially faced with the impracticality of singing together over an internet call. Liz said the latency issue was a huge problem because the delay in receiving sound would have everyone's voices out of sync. Singing and hearing your own voice louder than everyone else's took adjusting to as well she mentioned.

A clever solution was reached where everyone would mute themselves except for Liz. She would then start singing and people would join in while recording themselves on their phones. The participants would then send Liz their recordings for her to sync up using audio editing software and once it was successfully edited, she would send it to everyone involved. Liz had prior experience in sound editing which stood to her but there was still a lot of time and effort involved. It was hard for me to imagine the difficulty involved in perfectly syncing up audio from multiple recordings. When I mentioned this to Liz she said ''it was never going to be perfect but that was never really the point. The soul of this choir is wellbeing, and the music almost comes second. Singing feels good, especially when we do it together. Just being able to engage with everyone again was wonderful. It might only be something small but being able to help people cope during these difficult times makes a big difference in my opinion.'' 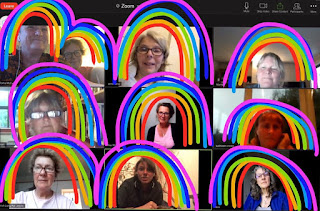 To keep up to date with Liz and Justin's work, please visit these websites: